Welcome to this new article about one of my favorite French island: the Reunion island! I went there for 10 days and I made a big program with lots of activities. However, there are of course places I couldn’t visit but I’m very happy because we did all the activities I planned.

First of all, let’s start with the west side where we can swim in the Indian ocean because it’s protected by the coral reef. But be careful: the Reunion island is famous for hikes, paragliding etc but not for swimming because there are a LOT of sharks (and sharks attacks).

West side of the island

First thing: wake up early! Especially if you stay in St Denis, like us. The road to go there is quite winding. First time we went there, we arrived at 6:05am but the sun was already shining. Fortunately, we came back another time and that was so much better! Here is the exact place you’ve to stop: click here (otherwise you can watch the map up there).

→ At Piton Maïdo, there are a lot of hikes. Good thing to know is that the Mafate cirque is only reachable by foot (or helicopter). We hiked up to the caves where we could find ice many years ago (approximatively 4h round trip, medium difficulty). There are big wells dug in 1830 suborder of Joseph Morénas. The ice came by the result of the summer’s rain and the cold of the winter. Slaves were charged of taking the ice down to the valley. Ice’s trade started in 1820 in the Reunion island.

→ The second hike is close to the little store where you can have a coffee. Moreover, all the workers there work for free and all the money goes to an association. We bought little turtles made of lava rocks. There are 3 different ways:  ilet des orangers, Roche plate or ilet alcide. We did just a little part of one of them but we already had a great view over the Mafate cirque.

We went to the turtle’s observatory. This centre saves marines turtles. They care about them and release them in the Indian ocean when they are capable of living alone without assistance. That’s why we don’t see the same turtles in this centre over the years. There are also terrestrial turtles, documentaries… It was built in front of a beach where the turtles used to give birth before humans came… Prices: 8€ adult, 5€ student. To visit the website click here.

One of the things I loved doing in the island was paragliding! It’s just next to the turtles’s observatory. There are several companies but I recommend you Air Lagon Parapente. It was a surprise for my parents (53 and 57 years old) and they really enjoyed it! I took the « lagon » flight and I paid 72€ per person. Down there, a photograph takes pictures of us and we have a go pro during the flight. If you want to buy the pictures/go pro videos it’s 20€. Don’t forget you USB key or iPad (or make sure you’ve enough space on your phone!).

In Trois bassins district, we hiked to see waterfalls. The entrance is normally forbidden but I found this hike on a travel book… If you go there, park you car on the parking lot of the Cormorans restaurant (ask to the landlord if you can park here – watch my map at the beginning of the article). Don’t park your car in the little dirty parking lot close to the start of the hike because sometimes they find broken cars. We went to the bassin des Aigrettes which was amazing.

On the Reunion island there is not a lot of beaches. BUT, when you put your glasses on and watch underwater this is AMAZING. I tried many beaches likes Boucan Canot (which is very touristic and by the way there was the red flag because of the big waves – it means we couldn’t swim). At the beach l’Ermitage-les-bains, I could see amazing fishes that I’ve never seen before! The ocean was very calm and flat so it was easy to make videos.

Moreover, we ate at the restaurant: Les Balançoires Sunset Club. This is a great restaurant where you can eat healthy food. But it’s very famous so be careful: the best thing to do is to come early in the morning (9 am-10am) to reserve for lunch. In fact, this restaurant does not take reservations by phone. The restaurant clerk has your phone number and calls you when a table is available for you. Then, enjoy the beach and the seabed while waiting. They called us at noon so that we could come and eat. These are Balinese poké bowl type dishes – although there are plenty of other dishes on the menu (the plates / cutlery etc were bought in Bali!).

6) St Paul’s market and the beach

In Saint Paul, every Fridays from 6am to 5pm and every Saturdays mornings. We can buy all the fruits and vegetables of the island + touristic objects. This is a very big market located next to a beautiful black sand beach.  Be careful though to negotiate because the prices are expensive for some products.

Piton de la Fournaise volcano and the east side

What would this article be if I didn’t talk about the Piton de la Fournaise massif! It is one of the most active and watchful volcanoes in the world. We were lucky enough to be able to climb to the top of the Dolomieu crater (which had opened a week before we went there). One thing is mandatory: GET UP EARLY! Moreover check about the opening of the hike because sometimes the massif is closed due to an eruption. In addition, it is important that the weather forecast is okay because otherwise you will not see what is happening in front of you and then you can simply get lost (and it is already quite hard to walk on sharp rocks). I advise you to go see the webcams by clicking on this link. 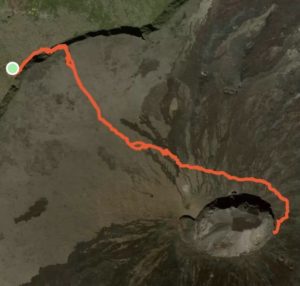 You will have to park in the Pas de Bellecombe car park (see the map). Here, we overlook the Piton de la Fournaise. Then, on the left, there is a path to go down and arrive on this lunar soil. First stop is Formica Léo, a small crater formed during an eruption in 1753. The hike to the crater is rough, the small sharp rocks below the feet don’t help. Remember to take plenty of water with you. A cap is also recommended because the sun is strong and don’t forget that you are at an altitude of over 2200m. Also don’t forget to bring warm clothes because the wind can blow hard once there.

→ Numbers: there are 13km and we took 4h30 round trip (not counting the breaks). Plan to leave early in the morning, clouds come quickly and can cover the trail so you wouldn’t see anything in front of you.

Small anecdote: the Dolomieu crater is about 324m deep, so we could put the Eiffel Tower in the crater!

As I explained to you in my first video about the Reunion island, I visited the vanilla plantation of Sainte Suzanne. It was really interesting. Touristic guides are very nice and explain to us in detail how vanilla pods are pollinated. The process for transforming and pollinating vanilla was developed on the Reunion Island. It was in 1841 that this process was discovered by a 12-year-old slave named Edmond Albius. Thanks to this major discovery, the Reunion island would become the leading vanilla producing country in the world by the end of the 19th century, with nearly 200 tonnes of vanilla exported. There is a small shop to be able to buy vanilla pods, jam … We bought small vials of liquid vanilla (10€) to put in the crêpe for example and vanilla powder. Prices: 5 € for a guided tour (free under 10 years old).

Waterfalls to cool off because in the east side: remember, swimming in the ocean is prohibited! We were only able to go to Bassin-la-Mer because Bassin-la-Paix has been closed since November 2019 (probably because of the difficulty in going there and the drownings that there have been in the past – it is the one closest to the parking lot). To go to Bassin-la-mer you have to walk about 45 minutes on a small path. The arrival is a bit tricky because it is slippery and steep, but take your time and everything will be fine! The water is cool but it feels so good after a good hike!

The Takamaka hydroelectric power station was built during 4 years from 1964 to 1968. Seven workers lost their lives due to the delicate construction of this plant. Indeed, the panorama is magnificent but the slope is steep. This power station produces 15 to 20% of the EDF network in the Reunion island. There are several departures for a hike (including the “trou de fer” – which we did not do). And we can see dozens of waterfalls … The clouds arrive quite early on the island since it is quite humid and it must be hot which brings up the mist.

St. Anne’s was used as the set for the film “The Mississippi Mermaid” with Catherine Deneuve. She is beautiful with lots of colors.

The Notre-Dame-des-laves’s, survived the 1977 lava flow which destroyed a part of the village of Piton-Sainte-Rose. It shows the huge black lava flow that stopped right in front of the entrance. On the way it is also nice to stop at the suspension bridge of the eastern river built in 1895. Moreover, it is here that we bought homemade cakes by a Reunionese woman (manioc, corn, cambare, jacques grain).

If you want to hang out a bit, this is the place to go! Anse-des-cascades is quite a touristic place but very beautiful. There are a lot of palm trees with orange trunks which gives a nice effect!

6) Salazie cirque and the Hell Bourg

The Cirque de Salazie is one of the island’s three cirques. We stopped by the magnificent Creole village of Hell Bourg, ranked among the most beautiful villages in France. It was in 1832 that the village was created around the discovery of water sources with therapeutic and medical benefits. There are old houses from the second half of the 19th century. We stopped at the Mare à Poule d´eau spot where we were immersed in a peaceful atmosphere. Surrounded by hills, everything around us was green. There were also a lot of fishermen. We also passed by the waterfall of the Veil of the Bride.

As you can see I don’t like a lot beaches but this one is superb! Palm trees, turquoise blue water…! The south is not ok for swimming but they have reproduced small pools surrounded by large rocks to allow you to cool off. The seabed is exceptional. Parking lot is large enough to accommodate a large number of tourists.

It is a tourist spot with a small artificial seawater pool for swimming. Nice, but there are a lot of people for a picnic. In addition, the parking lot is quite small. If you want more space and peace, here’s what to do: go to Ti sable (click on the geographic point on the map above the paragraph). It is a small cove of black sand, bordered by a black rocky cliff. Here, swimming is prohibited. In addition, afterwards you can walk along the path that runs along the ocean …

Finally, we end this article with something very, very cool: the Langevin waterfall. The road to get there is incredibly steep (as I have rarely seen). Do not park at the roadside: it is very dangerous and you can get you a hefty fine. Once you arrive, there are a few parking spaces, then you will have to continue walking up to reach the path that goes down to the waterfall. It’s a bit tricky, but it’s worth the effort. Judge by yourself…